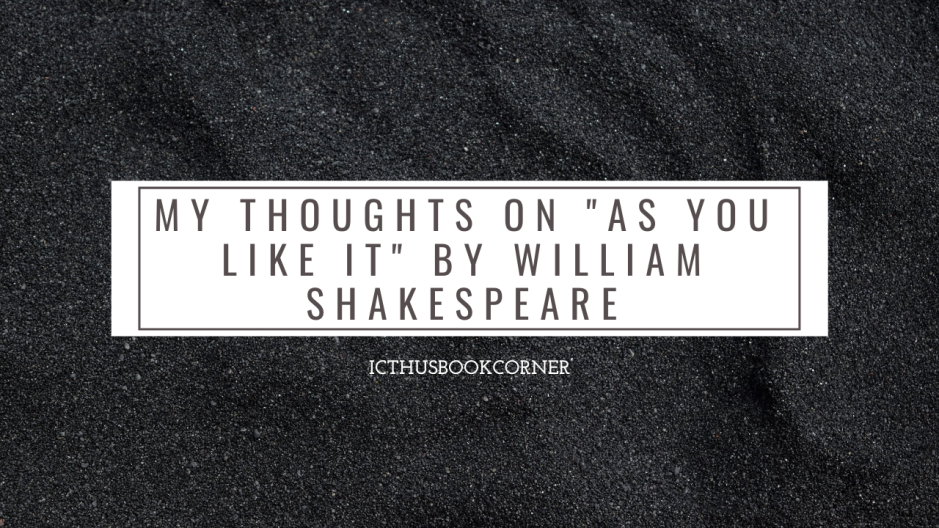 “All the world’s a stage”, said Jaques.

This was the first Shakespeare play I read in English, I had only read “Hamlet” in Portuguese before. I honestly enjoyed it a lot, even though I had some difficulties getting into Shakespeare’s language and writing style at first. At the moment, having read “Much Ado About Nothing“, I feel like I’m much more comfortable with his writing.

“As You Like It”, a five-act comedy by William Shakespeare, was written and performed around 1599 and first published in the First Folio of 1623.

This play has two main locations: the court that Frederick has taken over from his brother (the rightful Duke), and the Forest of Arden (where the Duke and his followers live in exile).

The central theme of “As You Like It” is love, much like other comedies by Shakespeare. It’s a light-hearted and amusing read where there is disguise, family feud and romance. However, while reading it, I kept thinking about how it might also be about the fluidity of gender, how it could be interpreted as an analysis of queer identity both of gender and sexuality. It is light, has loveable characters, happy messages and not to mention amazing quotes!

Rosalind was my favourite character in this play. She represents an excellent and ahead of its time female character, whom I enjoyed reading as she experimented with her recently discovered liberties as Ganymede. This is, Rosalind disguises herself as a young man (Ganymede), for the majority of the play, to pursue the man she loves and advise him on how to be a better, conscientious companion and lover.

In contrast to Jaques, who refuses to have an all-in approach to life and always has something to say about the stupidity of those around him, Rosalind gives herself fully to every moment of her existence.

That is pretty much it, I have nothing else to say about this play. Let me know if you have read this before or watched any of the film adaptations.

You can find me at:

I really shouldn’t be reviewing the work of Shakespeare, I’m for sure not an expert but here it goes!

Hamlet is a story of how the ghost of an assassinated king comes to haunt the living with devastating repercussions and it starts with the encounter of young Hamlet with his father’s ghost.

Revolving around revenge, betrayal, and madness, Hamlet is dramatic, entertaining and unlike what I was expecting an easy read but with a lot to take in. In this play Hamlet’s feigned madness is contrasted with Ophelia’s genuine madness.

This play was a joy to read, in the sense of inner satisfaction at the writing, the complexity of characters and the richness of the thought induced in the reader  by Shakespeare in this breathtaking drama.

I really liked this play, the only thing about it was the fact that it was a play (something I’m not used to reading).