Frances Ha by Noah Baumbach is a modern coming of age tale as well as a story about friendship. Frances (Greta Gerwig) is a 27-year-old dancer living with her best friend Sophie. Baumbach is a unique filmmaker, his movies tackle literally every subject matter while capturing real day-to-day life. In this film, he goes back to the basics of filmmaking: there are no complicated technics,  no colourfull shots and yet he manages to guide us through Frances complex life. 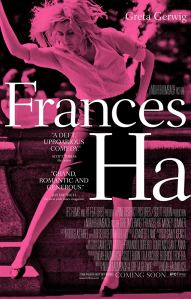 Frances’ life is as depressing and comedic as it is relatable, as far as the other characters go no one is overly dramatic. This shows us realism can be both depressing and unbelievably funny. As I see it, the film is centred in a friendship where one person wants to grow up and move on while the other is desperately holding onto the past in every way possible.

The director makes a homage to french new wave cinema and we can witness that in the scene where Frances running and twirling across streets of New York with David Bowie’s “Modern Love” on the soundtrack.

The script is so masterfully written by both Greta Gerwig and Noah Baumbach, not to mention so brilliantly performed. This film is a masterpiece and I can’t recommend it enough.

“It’s that thing when you’re with someone, and you love them and they know it, and they love you and you know it, but it’s a party and you’re both talking to other people, and you’re laughing and shining and you look across the room and catch each other’s eyes but not because you’re possessive, or it’s precisely sexual but because that is your person in this life. And it’s funny and sad, but only because this life will end, and it’s this secret world that exists right there in public, unnoticed, that no one else knows about. It’s sort of like how they say that other dimensions exist all around us, but we don’t have the ability to perceive them. That’s what I want out of a relationship. Or just life, I guess.”