“Booksmart” by Olivia Wilde tells us the story of two seniors, Molly and Amy, who are about to graduate high school and have spent their high school years exhaustively studying, never missing any school work whatsoever, because they believe this is the best and only way to get into a good university. They, all the sudden, find out that the other kids who have been partying and not taking school as serious as they have, have also gotten into good universities. With this, they feel like they should use this last night before graduation as an opportunity to not miss out on everything they have been passing up all these years. 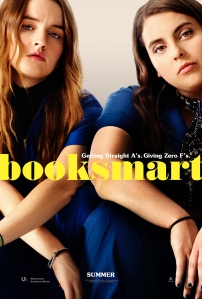 This is a well-made comedy, directed by someone we can see understands the genera. Not the mention, the amazing performances by Beanie Feldstein and Kaitlyn Dever who really boost the film to the next level. The supporting cast is just as remarkably hilarious as Feldstein and Dever and is given something more to do than be the manifestation of high school stereotypes.

It really feels like you are there with Amy and Molly, the plot never seems to stop our slow down mostly because most of the film is about this one night of craziness. By the end of the film, you really feel like you have connected with these people and want them to be happy and fulfilled.

It is wonderful to watch a film dealing with strong and supportive female friendships and it is also exhilarating to see it take place in an environment like a high school field with diverse students.

This film feels unique and was probably one of the funniest films I’ve watched in a long time! It manages to be hilarious and heartwarming, it is just wonderful.  For me, it was an 8 out of 10, please go watch it!