This book follows Tom, a young rebellious boy who lives with his aunt Polly, a very strict but caring woman. General consense says the purpose of this book is to “capture the spirit of american boyhood in the pre-civil war era”.

A lot happens to Tom in this book, he fells in love with the new girl in town, witnesses a murder, makes others paint his fence, pretends to be a pirate and goes off to live in a nearby island, makes the town believes he and his friends have drowned, among a lot of other things. As you can see he was a busy child. 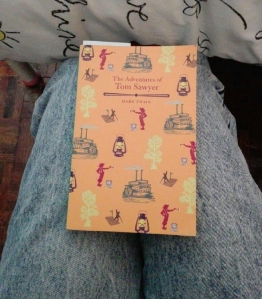 The treatment of extremely important issues in this novel was very appealing to me. Even though it is considered a children’s book it talks about murder and rape. There is also a lot of racism in this book, but I don’t know how intentional it is given that it was written in 1876.

The use of English from the 1800s together with the use of now considered archaic words certainly toke me some time to get used to. A big drawback for me was the fact that I couldn’t seem to feel empathy for Tom whatsoever, which is something that has never stopped me from enjoying a book but he just reminded me of those really mean children who need to hear the word “no” more often.

With all that being said, I found this to be an okay book, I went into it really excited expecting to be one of the best books I would ever read but it was just a quick, entertaining read, not that there is anything wrong with that. I recommend it if you want to get a perspective of what life was like during pre-civil war time in the united states.